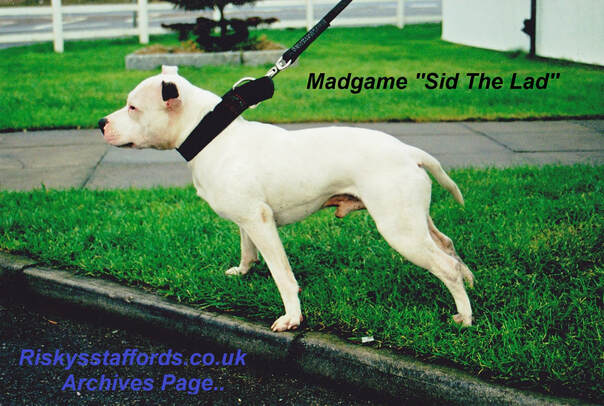 A Kennel Club Registered Old Time Staffordshire Bull Terrier that would and could do it all !!
Sid was owned by my good friend from Madgame who campaigned him at the Ed Reid I,K,C Spectaculars in 2000.
He gained a lot of recognition at these event's, winning many conformation classes, best male Stafford and best in shows.
At that time he was going against some real greats, Dexter, Holsten, Shakers Bulls Eye & Bear Jnr, just to name a few.
In condition Sid weighed 36lb and pulled 1150lb at the weight pull competition, he was a ACE at the A-Frame and loved to run the treadmill, apparently he would even sleep on the mill when left alone..that's how much he liked it !!
Over the years I had seen and spent a lot of time with Sid and must say he had a superb temperament and character.
He was 100 miles per hour and always gave Kris 100% at everything he was put to, a real athletic sporting Stafford !!
Sid was a fantastic producer and sired some quality litters, he could certainly stamp his mark and this was seen in his offspring Madgame ''Inja'' & Madgame Boo. These were also both exceptional Staffords.
He was also responsible for siring one of the Ghostlyease's Staffords early foundation female's Ghostlyease's Piper.
who in turn also went on to produce some great sporting Staffords !!
If you are lucky enough to have Madgame ''Sid The Lad'' in your pedigree? you have a real ''good un'' as they say !!

Some of Sid's Offspring pictured below. 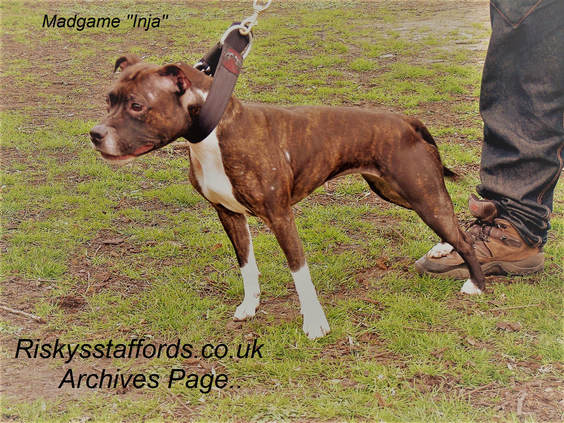 Madgame Inja.
She was from a mating between.
Madgame's Sid the Lad x Madgame's Blue Sky Spook. 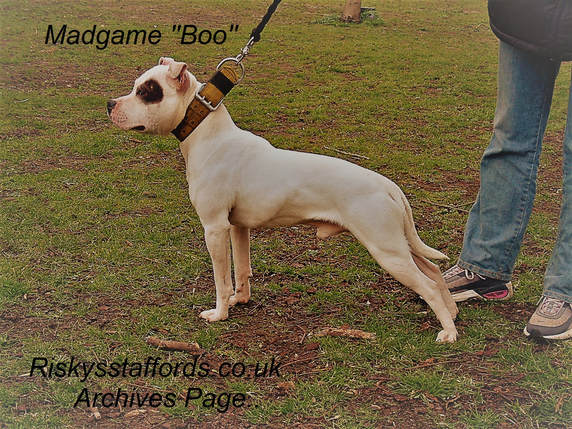 Madgame's Boo.
He was the result of a mating between
Madgame's Sid the Lad x Madgame's Inja.
2001 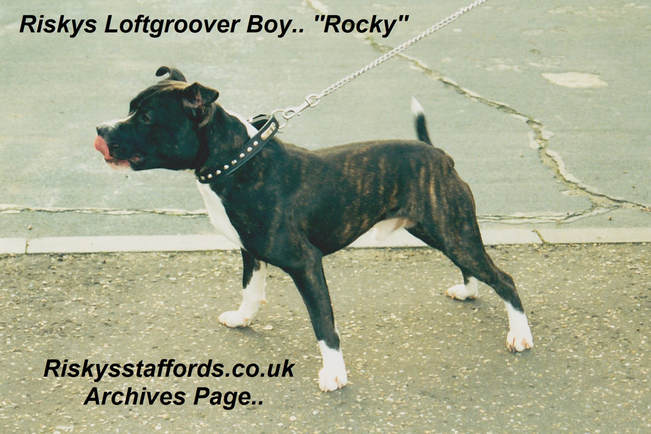 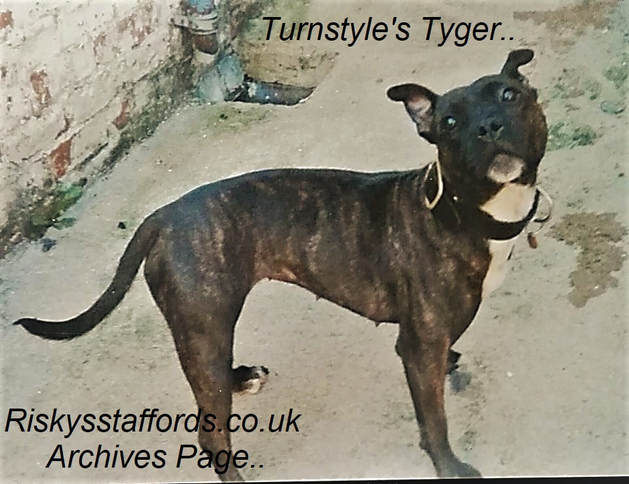 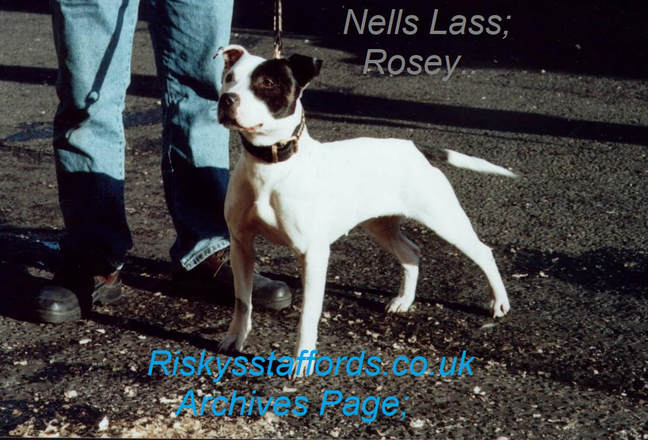 Rosey
Nell's Lass.
A Quality female pictured at around 2years of age.
She was bred by R Stevens ( Kimtyke ) and Co/owned with P Harrison.
Nell was bred to Rotherham Sam and Edgeworth Canava Barney.
Both litters she produced classic stunning examples of athletic Staffordshire Bull Terriers. 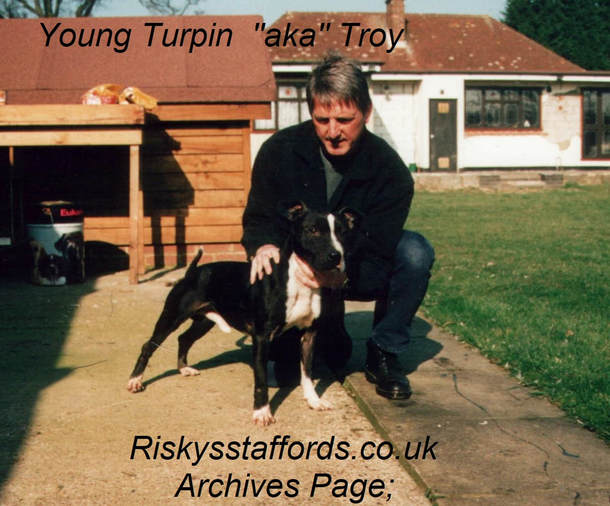 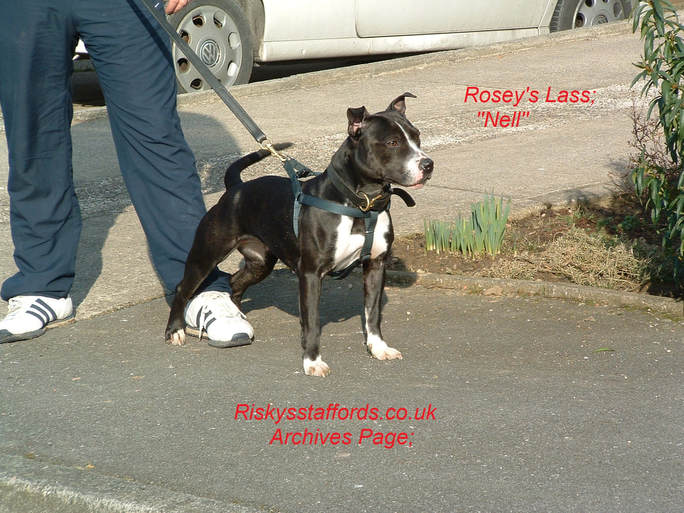 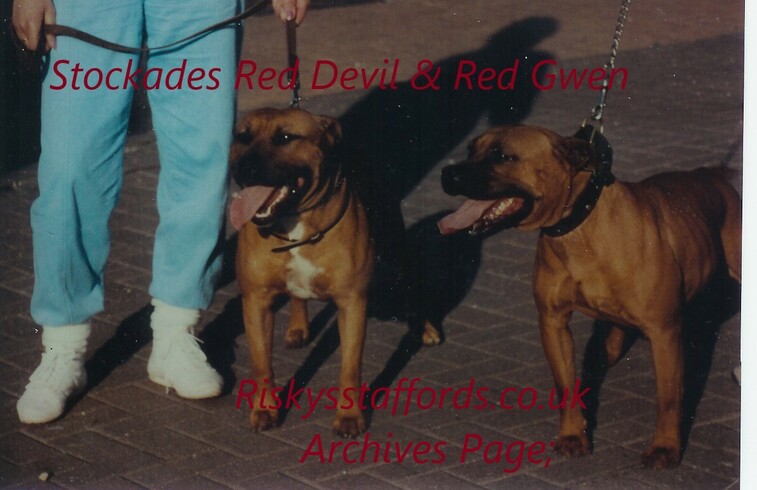 Stockades Red Devil & Stockades Red Gwen.
Early foundation dogs.
Derick Payne & Bob Heys
Owner breeders of the Stockade Affix.
A bloodline that has stood the test of time and still continues till this very day.
Can be found running strong through the Barnstorm kennels bloodline! 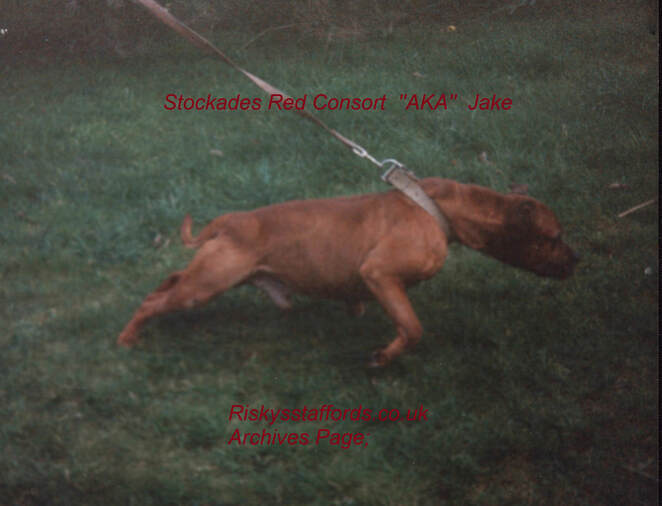 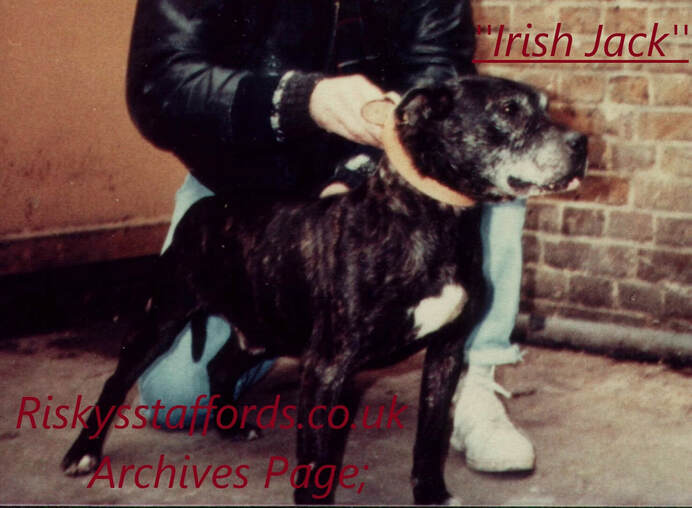 Irish Jack
Also known as Dann's Black Jack.
Imported to the UK from Ireland in the 80's.
A proven producer and can be traced back in most of the present day sporting Staffordshire Bull Terriers pedigrees.
Jack died of old age in 1989. 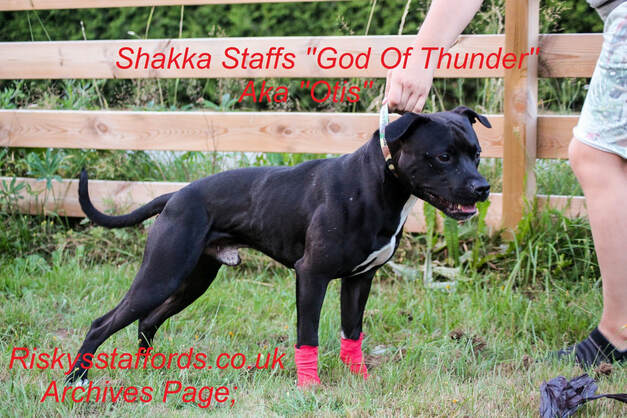 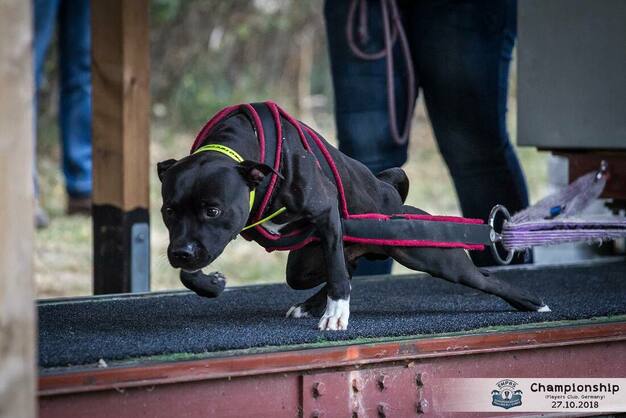 Otis in action, competing at the Weightpull Players Club Germany 2018 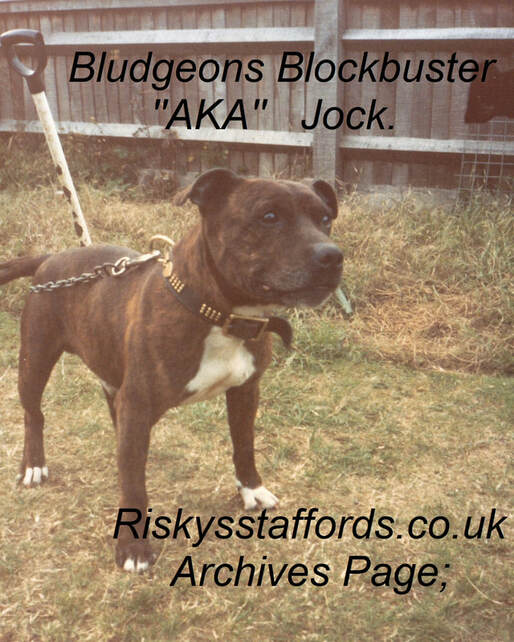 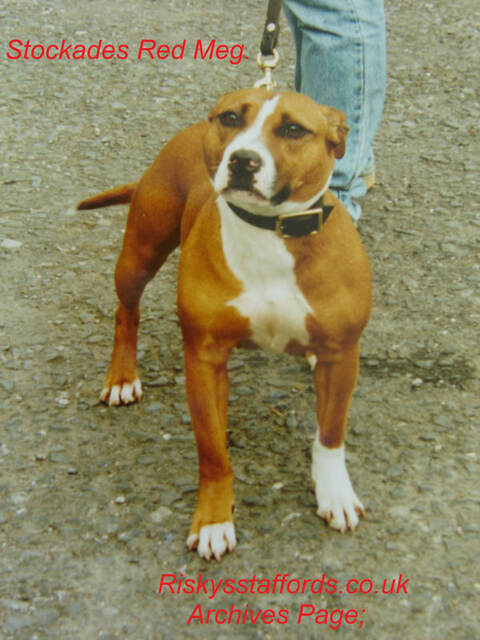 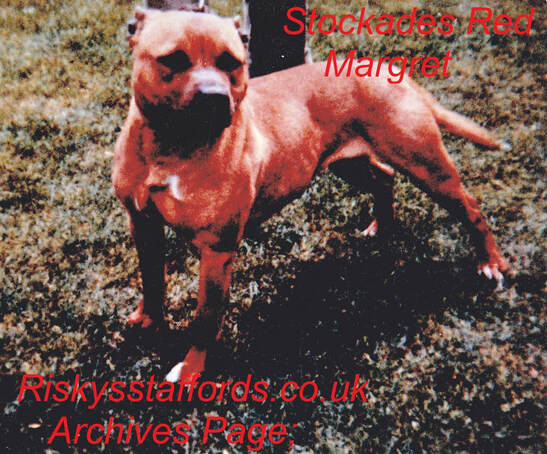 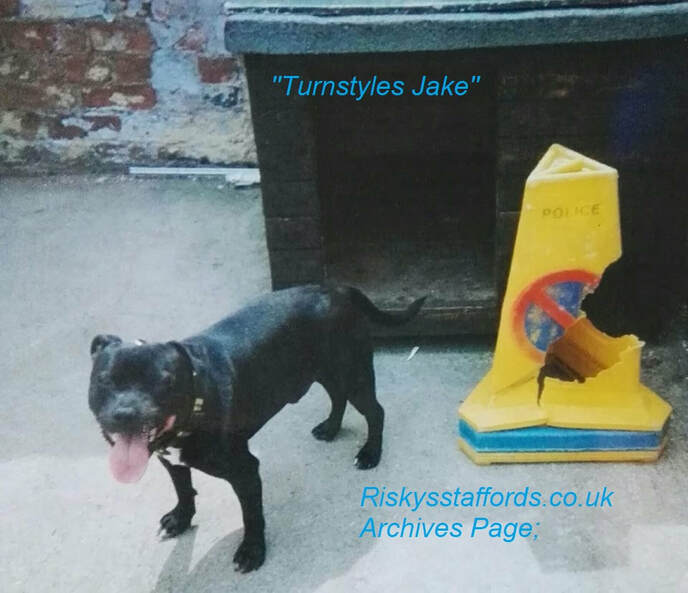 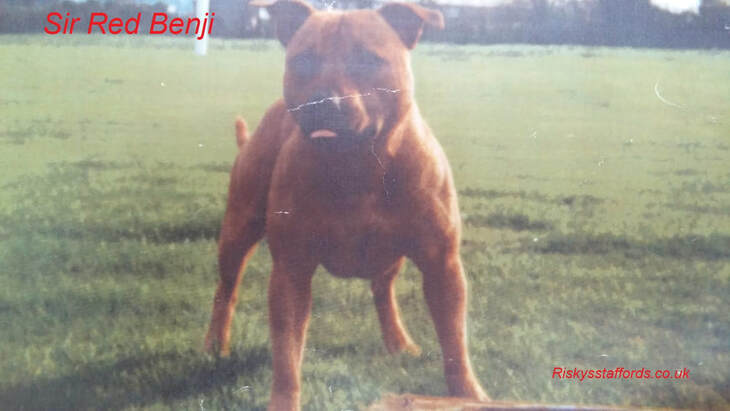 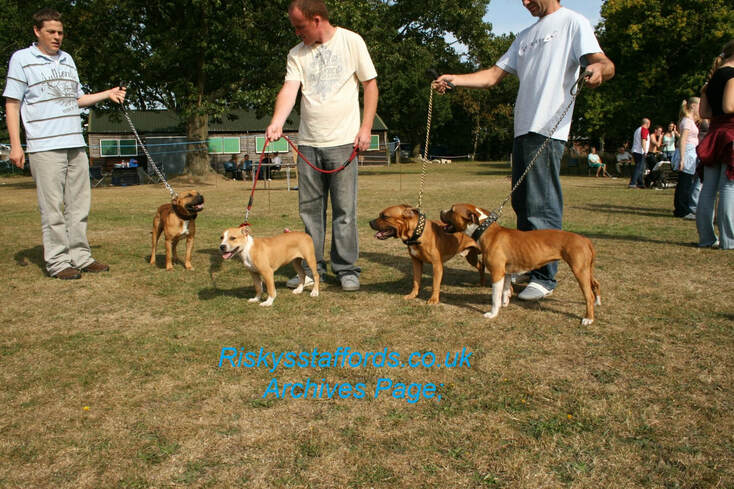 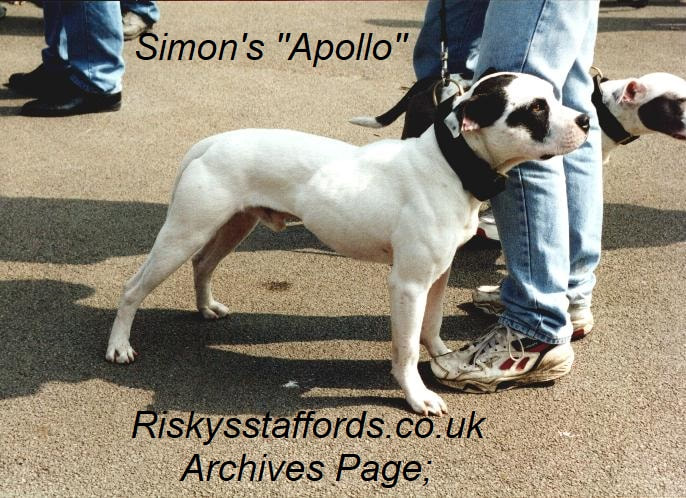 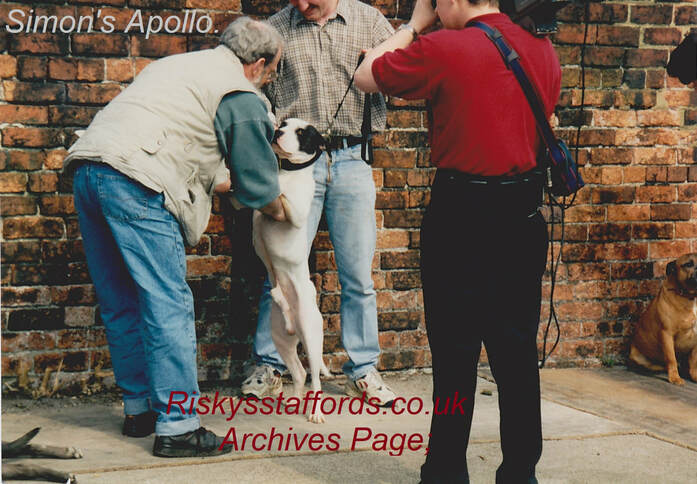 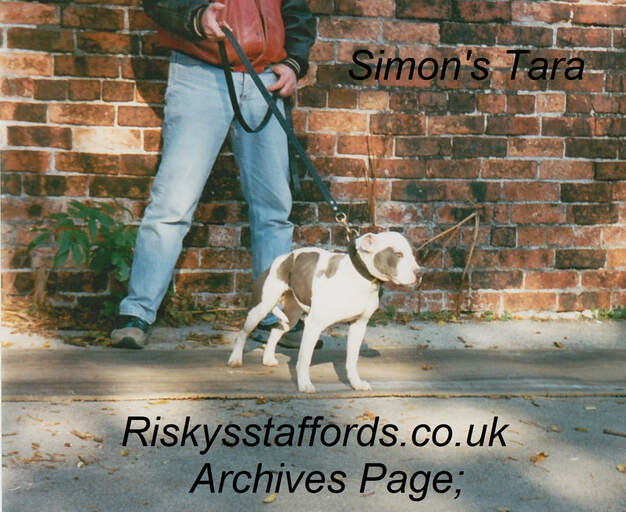 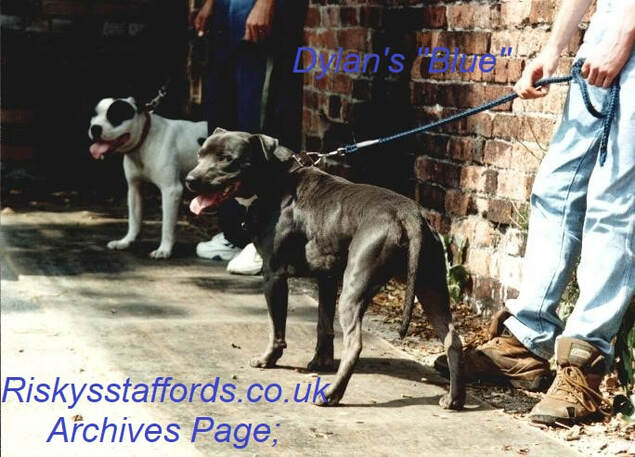 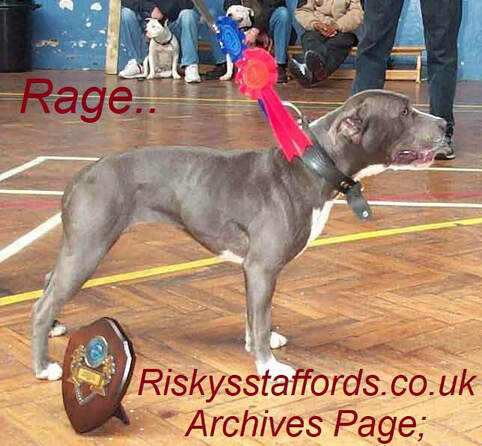 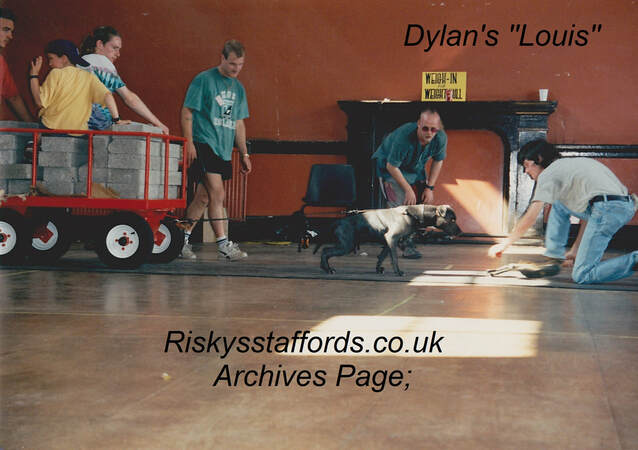 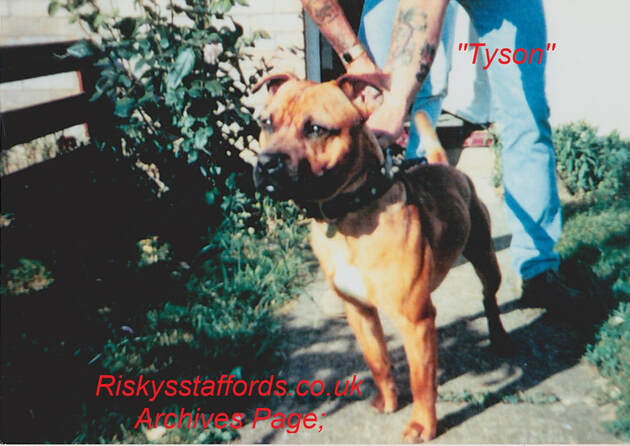 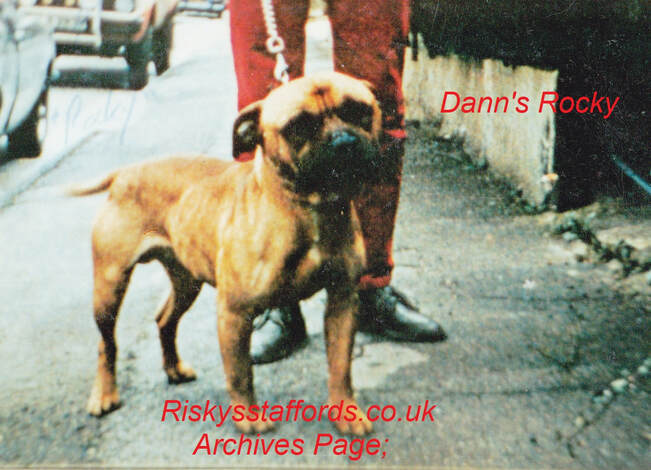 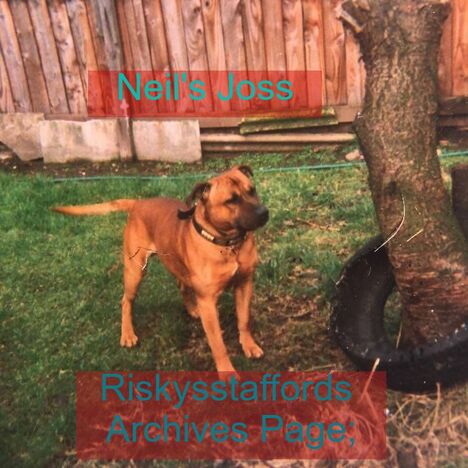 Neil's Joss
​Around 2 years old.
Red Strain Stafford
Pictured with his favourite toy.
Apparently he would rag that tyre all day long.
A great old fashioned Stafford from back in the day !
1984 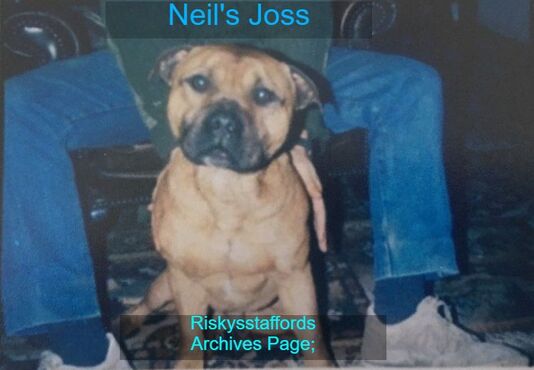 Neil's Joss
Tremendous head type with a serious look in those eyes!
Pictured in his later years.
Archives Page 4